So… I’ve been neglecting this blog. Another blog, created for a book discussion with friends from church has been getting all my love. I’ve also been doing some other stuff, which I may post here once it’s suitable for public viewing.

I have also been spending a lot of time on blogs, and came across this idea of playing the Random Album Game and thought it was worth a try. (Take a look at the rules.)

So, here’s introducing the fabulous Bert Freeman and their debut album And Good Health Have Vanished: 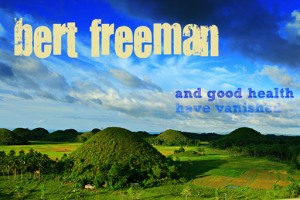